Have you heard of Minecraft? Of course, you have – it’s that game that is wildly larger than earth! Yes, it’s popular, but what I mean is that the world of Minecraft is statistically bigger than our planet in size! It’s bigger than Mars, the four Galilean moons, and dinosaurs. It’s basically the size of Neptune, expanding 62,000 kilometers! In this video, press ‘play’ and then gawk at the size of Minecraft world- right after planet earth. CHECK IT OUT!

This popular video game appeared in 2011 and has had over 20 million people buy the game since. This number only seems to increase, with about 8,000 people purchasing the game on a daily basis, and more learning to play every day.

What’s So Cool About Minecraft?

Minecraft is a sandbox video game filled with blocks – tons and tons of blocks. The characters are blocks, and they mine for blocks to build more block-like things. The block-figures do other activities too, like fight monsters, find food, and adventure around town.

As a sandbox game, there are no rules or clear goals, unless you make them up yourself. There are also three different levels of difficulty to play on, from the easiest level called ‘peaceful’ to the toughest level called ‘hard’, which depends on how difficult it is to satiate hunger, fend off monsters, or fight of attacking mobs attacking, etc.

On the other hand, you can choose to play in creative mode, if you’re into a laid-back activity of digging around with blocks on your computer for hours on end while listening to soothing music that drones in and out at odd intervals. In creative mode, dying is impossible, leaving you free of worries and full of prospering ideas!

I am Still Mind-Blown! 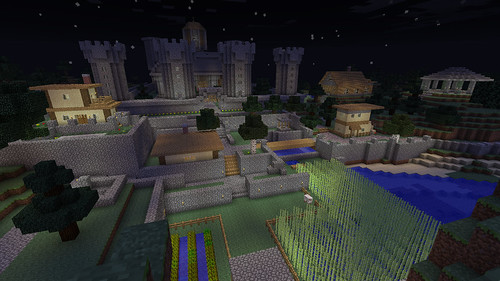 Compared to the Sims (the computer game where you control the Sims), in Minecraft, you are the person. You are the “Sim”. It is you that is digging through mines to get blocks, punching things, flying (if you’re using that version) dodging monsters, starting farms, building, or exploring new cities.

Whatever you want to do, go ahead and do it… And keep on doing it. Create your own world, if that’s what you wish!

A Lot of People Play it.

They play it so much that they built the world of Minecraft larger than the 15,299 miles of Neptune. To put this in another perspective, the outstanding world or Minecraft exceeds 130 quadrillion blocks, stretching from the coordinates +3,000,000 to -3,000,000.

It’s no wonder that people play this game so much since there is a ton more to explore online than in the real earthling world! This gigantic area includes individuals’ worlds along with the computer-made villages. Not to mention, the world of Minecraft is only going to get bigger and bigger the more people play and add on to their ideas.

However, unlike the earth and other planets, the world of Minecraft is a flat plane, which you might fall off the edge into, guess what? Blocks, blocks and more blocks.

Play alone or with friends, there really is not much to strongly dislike about this game. As demand for Minecraft on new devices like tablets and consoles increases and is not yet met, fewer people are playing the game. However, this seems like a small fix in the humongous world of Minecraft, so soon enough, this computerized world can only continue to grow!

2 thoughts on “Minecraft is Bigger Than Earth!”