Smosh is a ridiculously funny website that’s been around for what seems like forever. The brainchild of meme-loving, Youtube-fanatic, gamers, Anthony Padilla and Ian Hecox, are hilarious. Smosh hosts memes, comics, cartoons, original comedy videos, such as “Ian is Bored” and “Lunchtime with Smosh,” blogs, and more.

Their daily cartoons and comics are just the tip of the iceberg when it comes to the hilarious compilation of media on Smosh. Today, however, we’re talking about Smosh’s videos. Specifically Smosh’s videos from the mid 2000s—because, hey, we’re sentimental, and we thought you might be, too.

It could be argued that this is the video that started it all for Smosh—but don’t quote me on that. We all have our favorites. But at 28,513,952 views, it’s hard to argue against the fact that this video made an impact on a ton of people.

It’s difficult to say what’s so compelling about the video—for the most part it’s just Ian and Anthony flailing around shirtless. The simplicity and ridiculousness of it all is what makes it so compelling. Not to mention somewhat hilarious.

Anthony Gets a Haircut

What could be better than watching someone get a haircut by their friend wearing a sweatband in the name of making a girl like them? Not much.

This video is a classic example of Anthony and Ian’s humor that is outlandish, over-the-top, and sarcastic. What do those three things remind you of? Oh, that’s right: Smosh! 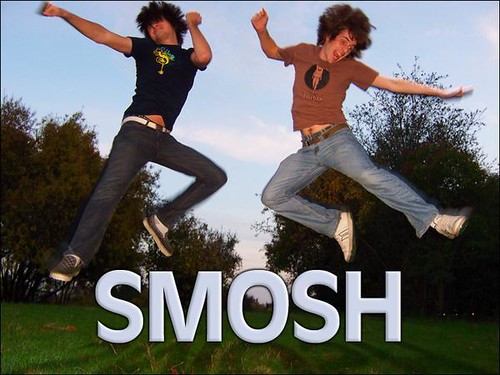 This video starts out with Ian and Anthony playing Frisbee in a park before descending into pipeline sewers, AKA TMNT’s home base. Rather than ending up with TMNT, however, the boys end up in their bedroom. Suddenly, they break out into song and transition to a montage of them wearing laundry baskets on their backs to mimic turtle shells, making silly faces, and badly lip-syncing.

While this video might sound like it’s Ian and Anthony having a competition to determine who can eat the most hot dogs in five minutes, that’s not the case.

In actuality, Ian and Anthony battle it out seeing which of their favorite foods is superior in a taquito vs. donut war. Using the foods to do simple household tasks like plunging the toilet, or attempting to wear them as shoes, this video had us crying from laughter and the absurdity of it all.

Smosh videos have only grown in absurdity and popularity since their debut, and we’re elated they’re still here to keep us laughing. If you wish to see any of these fantastic videos, simply click on the name titles and enjoy! We’ve done all the hard work for you.

Ian and Anthony, never stop being awesome! We will truly cry when your Internet reign of humor ends.